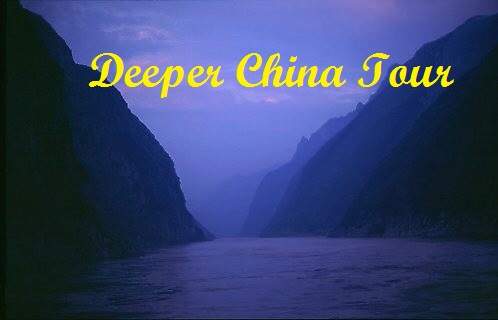 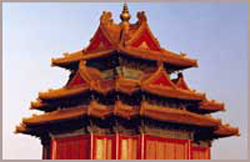 Arrive Beijing and transfer to hotel 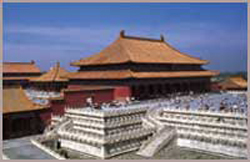 You are going to wake up this morning in the magnificent 800 year old Capital city of Beijing! While standing in the middle of the largest square in the world – Tiananmen Square, you will really want to pinch yourself. That’s right, you are in China! Then you will follow the meridian line of this ancient city and enter the majestic Forbidden City, which has been a monument to classic Chinese architecture for over 500 years.

In the afternoon, you will explore an authentic Chinese Imperial garden – the Summer Palace. It is to be a summer resort built exclusively for the Emperor and Empress. You are going to enjoy the legendary scenery on a Dragon Boat, a treat originally reserved only for the Imperial family!

Tonight you will savor the most authentic Peking Duck dinner in Beijing. A great way to finish an unforgettable day! 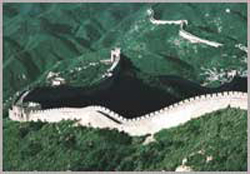 Day 4 – BEIJING (B, L, D) A full-day excursion takes you forty miles north of Beijing to the Great Wall. This wonder of the world was built more than 2,600 years ago. The Wall was an extraordinary 4,000-mile-long fortification built to thwart barbarian invasions. A walk along a section of this enormous edifice is definitely a not-to-be-missed experience.

This afternoon, you are going to walk through the Sacred Way, which is lined with the colossal stone statues leading to the Ming Tombs. These lavish burial chambers of thirteen emperors of Ming Dynasty will reveal those rare treasures that have been uncovered through years of excavations. 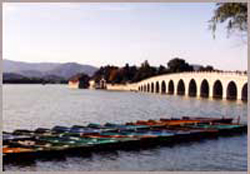 We begin this day with a rickshaw tour through old downtown Beijing. These historic narrow alleyways are called hutongs. You will really be amazed by the peek into the everyday life of the real Beijingers’! You are going to enjoy a face-to-face visit with a local family there. So prepare your list of questions that you are dying to ask, and anticipate a genuine warm welcome from your host!
This afternoon, you are going to visit the majestic Temple of Heaven, where the Ming and Qing emperors prayed annually to the heavens for a good harvest. It is one of the most memorable symbols of Beijing and one of the most photographed sites in Chinese architecture!

A performance of the renowned Beijing Opera highlights your evening. 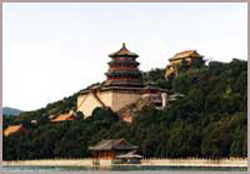 Today you are going to fly to Xi’an, the cradle of Chinese civilization. Xi’an was the state capital of 73 emperors, spanning 11 dynasties over 2,000 years. Get a feeling for this medieval metropolis as you stand on top of the old city walls, enjoying the fabulous bird’s-eye view. One of China’s most prosperous times in history is during the spectacular Tang Dynasty (619 – 907), during which Xi’an was the capital. As the eastern terminus of the Silk Road, Xi’an played a key role in attracting and gathering a diverse variety of foreign people, products and culture.

Tonight, you are going to have a feast while enjoying the dazzling Tang Dynasty cultural show featuring music, dance, and colorful traditional Tang costumes. 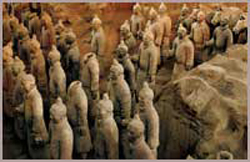 This morning you are going to visit the Big Wild Goose Pagoda, which is still an active temple. In the afternoon you are going to visit one of the most stunning sites in world, the life-sized Terra-Cotta Warrior Army. An underground army buried to protect the legendary first Emperor of China during his afterlife. While in awe of those thousands of life-sized soldiers, officers, horses and wagons dating from the third century BC, you can’t get over that this wonder was accidentally discovered by a farmer while he was digging out a well in the early 1970’s! If you are lucky, you will also see some archaeologists still working on site to uncover another part of the vast tomb complex built by first emperor in Chinese history!

The Dumpling Banquet dinner will be a great ending of your fantastic day in Xi’an. 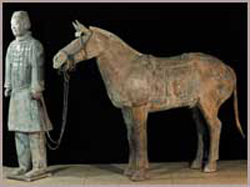 Your first stop today will be at Xi’an’s well-presented Shaaxi Provincial Museum, with its exceptional collections tracing back from the matriarchal societies of the third millennium BC to the glorious Tang dynasty in the tenth century.

This afternoon you are flying to Chongqing, which is the largest municipality in China with over 30 million people. Famous for being known as the “Foggy City” and “Mountain City”, you will be amazed by seeing the local people carrying heavy loads up and down hill with ease. You are going to visit the Stillwell Museum, which will demonstrate the rich history in China of the Flying Tigers and the Second World War. Later you are going to board your Yangtze River Cruises ship and be welcomed at the Captain’s cocktail party! 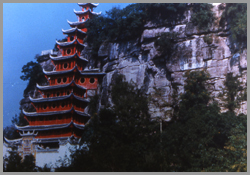 Your Yangtze River adventure has begun! Yangtze River, the third longest river in the world and the longest in China, has long been a dividing line of Northern and Southern China. Sailing downstream, you will travel to Wanxian, Fengdu or Shibaozhai, depending on river traffic and water levels. In Wanxian, you will be struck by the architectural influence of the West in the form of two local European-style churches, one Catholic, the other Protestant. These hark back to the first Jesuit visitors to Wanxian and to this port town’s controversial incorporation within the foreign Treaty Port system in 1902. As dusk settles, the town’s local bamboo cane market comes alive as buyers and sellers noisily negotiate the sale of handmade summer beds, hats, fans, straw shoes, furniture and basketry. You will also be entertained by a local acrobatic show. In the “Ghost City” of Fengdu, you are going to take a lift to tour the temples on Mingshan Hill. In Shibaozhai, you will be impressed by the red, multi-storied temple built on the sheer cliff, which was finished during the reign of Emperor Qianlong (1736-96). The addition of a wooden staircase has made a substantial improvement on the original means of ascending this cliff-face temple; a few hundred years ago, pilgrims only had an iron chain to help them proceed up the sheer rock-face!

After returning from the shore excursion, you are free to enjoy a feature film, a demonstration of traditional Chinese arts or just simply have a drink while enjoying the beautiful scenery floating by. 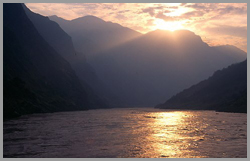 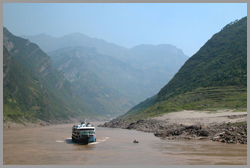 Today you’ll experience some of the most fascinating sights in all of China, including two out of the Three Gorges. The first of the famous three gorges requires an early morning start. Take a coat and hat with you up on deck, while passing the mighty Qutang Gorge, sailing through its towering cliffs in the early morning mist.

After breakfast, you will be transferred to smaller motorized sampans for an excursion up the gorge at Shennong Stream, via the Daning River. You are going to the adventure of the enchanting Three Lesser Gorges, one of China’s most scenic areas. Here you will witness the hard working local villagers using bamboo hawsers to heave your wooden boat up the gorge against the fast-flowing water current. Generation by generation, this method was the only means of transporting goods upstream before the introduction of motor engines on the Yangtze.
After returning, you will see the second of the gorges, Wu Gorge, which is famous for its rushing water and jagged turns. You will discover another ancient mystery – Hanging Coffins high up on its banking cliff-faces in the air. The local Ba people, one of China’s ethnic minorities, centuries ago buried their dead in long wooden coffins pegged to the gorges’ sheer rock-faces. Spotting those mysterious ancient hanging coffins will add quite a fantasy to the mist of Yangtze River.

This evening the boat will reach the Three Gorges Dam, where it will queue shortly before passing through the first and directly into the second of the gigantic locks in this five stage dual lock. The reason your cruise boat will pass straight into the second of the five locks is that until 2009 the river level has been raised only 40 meters (120 feet) from its original level to 135 meters above sea level (as measured at the dam). After 2009 the water level will be raised an additional 40 meters to 175 m above sea level, at which time all five locks will need to be employed to raise and lower ships between the lower and higher water levels on either side of the dam. 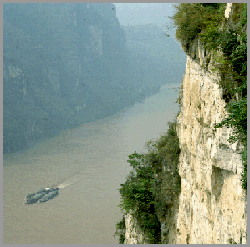 Early in the morning, you are going to pass through the last Gorge, the Xiling Gorge. The longest one of the three, it is over 60 miles long and famous for the odd rock formations over the treacherous currents. You will visit the impressive construction site of the Three Gorges Dam site in Yang Jia Wang.

At noon, you will say good bye to all the friends on the boat and disembark from your Cruise at Yichang. Then you will begin the three hour drive to your next destination, Wuhan. You will stay in Wuhan overnight. 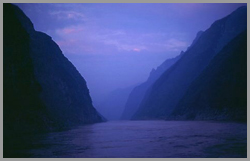 Wuhan is an important industrial city in central China. You are going to tour the Ancient Music Pavilion (Hubei Provincial Museum). The treasures housed in this museum were discovered in a royal tomb of the Warring States period (475-221 B.C.). You will attend a concert performed by the restored ancient musical instruments-Bianzhong, the Chime Bell. (the oldest musical instrument found in the world). You will also visit one of the most photographic sites, the Yellow Crane Tower, which has inspired so many ancient Chinese poets and even Chairman Mao.

In the afternoon, you are flying to Guilin, the most picturesque city in China, famous for its splendid natural scenery. Its romantic countryside will soothe you of your tiring urbanism. Enjoy water buffalos strolling in the lush green rice paddies combined with the craggy limestone background, you will really get lost in this picture! Elephant Trunk Hill will vividly demonstrate the miracle of nature: An elephant enjoying his moment by the Li River! Don’t miss the well lit up image of this elephant at night. That will be the highlight of your dream!
After dinner, enjoy the Cormorant fishing during their night shift 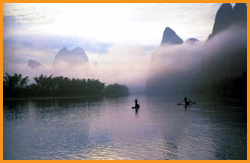 Early in the morning you will enjoy a relaxing boat-ride along the highlight of Guilin, the meandering Li River. Clumps of phoenix tail bamboo trees line the shores, little bamboo rafts floating on the water with the cormorants resting on them, every once in a while awakened by the swimming boys. The cruise will take you to Yangshuo, which is more famous for its beauty than even Guilin! The open market in Yangshuo is a wonderful example of a country-style free market.

After heading back to Guilin, you will be entertained by the colorful Minority ethnic dinner and show. 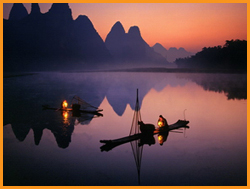 The Reed Flute Cave, also known by another beautiful name, “The Art Palace of Nature”, features fantastic natural stalactite and stalagmite formations, artfully illuminated by multicolored lights. The afternoon will find you en route to Shanghai, the city considered to be the most Western of Chinese cities. Established early in last century, it is the financial and commercial center of China today. You will be impressed by the skyline of this stunning metropolis.

Enjoy the marvelous stunts of an Acrobatic Show tonight. 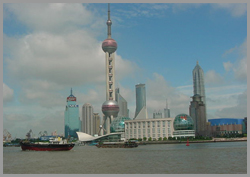 You are going to see the old section of this prosperous city, Yu Garden, a finely designed maze of elegant pavilions and ponds. While standing on the Bund, China’s most famous waterfront stretching about a mile along the Huangpu River, you will see the contrast of both the old western buildings finished at the beginning of last century, and the tallest TV tower in Asia, the Oriental Pearl.

Shanghai’s Art Museum is a very modern design, and has an extensive collection of all aspects of Chinese art from ceramics to jades, furniture, costumes to paintings, and more.

You are going to say good bye to China in the toast at the Farewell Banquet. 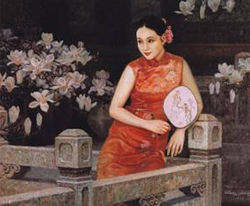 Tour Price Will Include:

Not included in the tour price:

For more information on the China Business Tour, call us at (408) 438-6840 or email us at Jia@Jiasdreamtours.com.
See Terms and Conditions  — To Top of Page