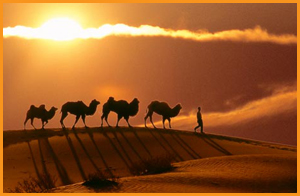 Xi’an is the cradle of Chinese civilization. Located in the very center of the Middle Kingdom (the literal translation of China), Xi’an served as the ancient capital of China for 11 dynasties from the 11th century B.C. to the early 10th century A.D. and was the first capital of a unified China. Xi’an is over 2000 years old, with 73 emperors buried here. As the starting point of the famous ancient “Silk Road” that linked China with central Asia and the Roman Empire, Xi’an was the key place for China to open the door to the outside world! From as early as the Second Century B.C., China’s silk was transported from Xi’an to central Asia and Europe. Xi’an lies amidst 8 rivers and mountains, in the center of the fertile Guanzhong Plain in Shaanxi Province, giving Xi’an the best and unique Feng Shui! Xi’an was famous for its fertile soil, mild climate, adequate rainfall and rich harvests, and it played an irreplaceable role in Chinese history!

Xi’an is the birth place of Chinese civilization! Excavations show that as early as the Neolithic Age (about 6,000 years ago), a matriarchal clan was formed at Banpo village in the region. In 1953 Archaeologists discovered by chance a treasure trove of thousands of stone tools and daily utensils, houses, burial pits for adults and burial jars for children. The discovery of so many artifacts is indeed unprecedented. All these finds give evidence to the fact that a Tan Lady of Courtmatriarchal clan community flourished here. So you can see a fascinating exhibition about those early days at the Banpo Museum, and the leadership.

Thousands of years later, the Zhou Dynasty (1100 -221 BC) kings established their capital in settlements only a few miles from the present-day Xi’an. When China was finally unified for the first time as one nation by the Qin Dynasty (221 -206 BC), Xi’an was once again the capital of the country. Xi’an is the home of the eighth wonder of the world, the Terra Cotta Warriors. Created by Qin Shihuang, the first emperor of a unified China, this 8,000 strong army of life-sized warriors and officers along with horses and chariots serve as his eternal guarding force, still in their battle formation, facing east against the six conquered kingdoms; eternally vigilant and awaiting the command of their emperor! Emperor Qin Shihuang’s mysterious tomb is still uncovered and untouched, waiting for his day to face the world again! 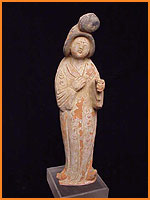 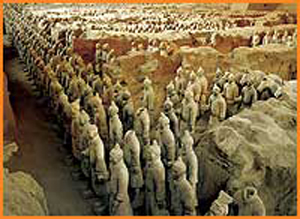 In its most glorious time, during the Tang Dynasty (618 -907 AD) Xi’an (then called Chang’an, which means eternal peace), flourished and developed so quickly that it became the most important metropolis in Asia, with a population of more than a million people living in a vast, well-planned area protected by large city walls and ramparts. In its heyday during the Tang Dynasty, Xi’an was the most important international metropolis in middle Asia; attracting businessmen, traders, scholars and students from all over the world. That is how the magnificent Tang culture, with its architecture, costumes, painting and calligraphy was spread out through the ancient Silk Road and all the other channels, to demonstrate to the world China’s dominant position at that time.

Xi’an was the portal through which Buddhism reached into China. This sophisticated system of philosophy first came to Xi’an about 2000 years ago and later developed into the dominant religion in China. The Big Wild Goose Pagoda is a symbol of the city as well as a monument to Buddhism in China!

Xi’an was the portal through which Buddhism reached into China. This sophisticated system of philosophy first came to Xi’an about 2000 years ago and later developed into the dominant religion in China. The Big Wild Goose Pagoda is a symbol of the city as well as a monument to Buddhism in China!

A stop in Xi’an is a must for your trip to China! Not only will you marvel at the sight of the Terra Cotta Warriors, but also at the unique blend of the Xi’an culture. The Muslim influence here is very apparent from the people’s dress, architecture and local cuisine. The local people here really love their hand made noodles and dumplings. The dumpling banquet is a one-of-a-kind experience that should never be missed! The dumplings are as artistic as they are delicious! They come in all sizes and shapes. Some of the shapes are kittens, peaches, fish and many more. And of course the ingredients vary as well from various vegetables and meats to fried walnuts. Just remember to pace yourself because there are 30 courses! The Tang Dynasty show is another highlight during your visit to Xi’an. This dazzling extravaganza is a wonderful feast for the eyes! You will see colorful authentic costumes, traditional Tang music and Imperial dance. The atmosphere will definitely remind you of Xi’an’s glorious days as the capital of the great Tang Dynasty! 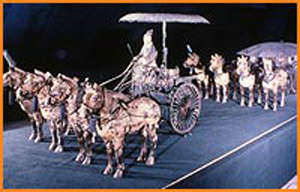