The Great Wall of China! 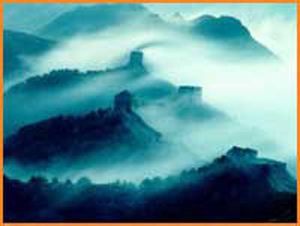 The most awesome man-made structure ever created in the ancient world, the Great Wall of China lies across the northern borders of China, snaking its way through most of the provinces in northern China. Just like a giant dragon, the Great Wall winds up and down across deserts, grasslands, mountains and plateaus stretching approximately 6,700 kilometers (4,163 miles) from Shanhaiguan in the eastern part of China to Jiayuguan in the western part.

The Great Wall of China has been there for more than 2,000 years, and the only way man can look upon the sum total of this handiwork is by viewing it from outer space! Because there is nothing even remotely comparable, the dimensions of the wall are hard for the mind to grasp. It has been estimated, however, that the earth and stone used in the project could build a wall around the equator, one meter thick and five meters high, more than ten times!

No one can tell precisely when the building of the Great Wall was first started, but it is believed that it originated as a military fortification against intrusion by tribes on the borders during the early part of the Western Zhou Dynasty (1100 BC – 771 BC). By the early days of the Spring and Autumn Period (770 BC – 476 BC), each principality in China had constructed its own great wall at various strategic places, north, east, west and south – over the vast territory of China, to defend itself from rivals. Each section stretched several hundred kilometers in length. It was not until the Qin Dynasty (221BC – 206 BC), that the first emperor of China, Qin Shihuang, finally linked all of the individual walls into one solid monolith. Of course, as the first emperor, who united China into a single, centralized country, Qin Shihuang had the ambition to conquer the whole world! So he decided to put the entire nation’s effort into building the strongest and longest wall ever, which would be a great demonstration of his heroism and ambition! After that, there were other notable dynasties that would rebuild and extend the Wall: notably the Han Dynasty (206BC-220 AD), and the Ming Dynasty (1368AD -1644AD). 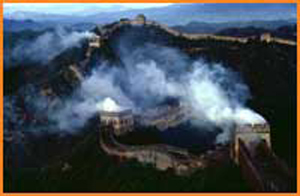 For centuries, the wall served succeeding dynasties as an effective military defense. It was only when a dynasty had weakened from within that invaders from the north were able to advance and conquer. Both the Mongols (Yuan Dynasty, 1279-1368) and the Manchurians (Qing Dynasty, 1644-1911) were able to take power because of the weakness of the government brought on by the poverty of the people. But no outsiders ever found any weakness in the Wall to exploit.

The wall was originally intended as protection against the northern frontier enemies. After thousands of years of decay, expansion and rebuilding the wall has become the symbol of the indomitable Chinese spirit. The most popular visited section of the Wall, called Badaling Great Wall, is about 500 years old and is in Beijing. The oldest part of the Wall is in the far west out in the middle of the desert and is over 2000 years old. Those ruins lay in sand, and other than a few inches showing above the sand, you can barely tell the grandeur of the Wall! 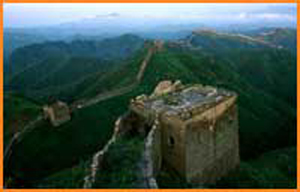