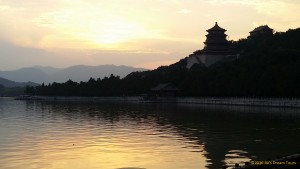 This trip seems long overdue; I should have been back sooner. It’s my hometown, my birth place; a place that appeared in my dream many times. It all seems so familiar; I can smell the memory from the past in the air while it also appears strange, as there are so many changes that I barely can recognize it. Like a reunion with an old friend, the feeling is mutual; maybe I seem different to Beijing too.

The two weeks were swirl, so much to capture, so much to reflect, just when I’m about to adjust myself back to Beijing style, time to go.

One of my favorite trips and also the only leisure trip during the visit was a visit to the Summer Palace! The whole lake filled with green lotus leaves, even the air is filled with the lotus scent, and it’s a very light fragrance with a touch of mint. I haven’t smelled that for so long, I almost forgot. What a treat, not only visually, but also for the senses. I remember my Baba would pick two lotus leaves from the end of the lake in during the lotus blooming season and bring them home to make me lotus leaf porridge. He used the leaves to cover the porridge while cooking; afterwards the porridge absorbed the light fresh fragrance from the lotus leaves, and also got the beautiful green hue. That memory stays with the hot summer memories of Beijing. 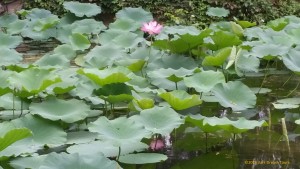 We entered from the newly built palace gate, walked almost the whole circle of the park, literally around the border wall. That was our usual routine way back when Baba took me there as a child. At that time there always holes on the southern side of the wall, probably made by local farmers, so they could get in without paying the entrance fee. So each time we would just follow the wall, and for sure there would be one hole big enough for us and our bicycles to get in, sometimes there was even more than one hole there. Once we’re in, we would head to the south side of the park, far away from the touristy area; very few people visited this side of the park. I loved that feeling, as if the whole park was just for us. We would bike for a while, then find a bench to enjoy. Often we brought some snacks with us, could be fruits like peaches, or water melon, or chestnuts. Baba could always find water for us to wash hands and fruits. It was a treat to eat our snacks in the park; whatever we brought always seemed to taste better. Somehow I don’t think I totally appreciated how beautiful it was then, sometimes it just felt a little boring, seemed we would sit on the bench forever. I was always anxious to go somewhere, not wanting to sit still. But still it made a lasting impression on my childhood memory.

It is a big circle around the lake, we biked all the way to Hall of Recognition of Talents, Baba had friends there. Baba had friends everywhere. We were always treated nicely because of Baba. I remember the scenery was always peaceful on that side of the park, more trees, and more open views of the Western Hill and the Jade Spring Tower on top of it. Any time of the year, it was just beautiful. 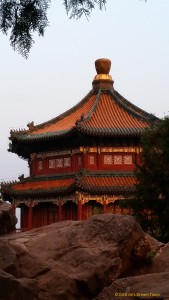 In the winter, there are always people who are swimming in the lake, especially on that side. Their skin was so red, like shrimp, and their face had a dramatic smile. Now I started to think that’s probably also because it was too cold, they couldn’t a have natural smile.  Naturally Baba liked to chat with them. They told Baba they had to start swimming from summer, with no break, so they could get their body adjusting gradually in the winter. Once a father and son ran towards us, Baba knew both of them. The son’s name was Wangyang, he was around 10 years old. He was running by his father’s bike, his father was biking very fast. The father told Baba, that Wangyang fell through the ice. Though he was told many times not to walk on the ice because it’s too thin, like many 10 year olds he refused to listen, and finally fell through. Wangyang’s father had to keep him running to stay warm. I’ll never forget that scene.

In the spring time, it’s a beautiful world of flowers. The whole island is full of wild flowers, in full bloom. I particularly liked the little purple one, called Eryuelan (Orychophragmus Violaceus, also called Chinese Violet Cress). It’s very small but very delicate, with a vibrant purple color. Baba always sang the song named after this flower: Eryuelan. He taught me that song afterwards. There’re also a lot of peach and cherry blossoms, I always think the flowers blossom differently in China compared to the US. In the US, I don’t have any particular feeling when I see them blooming, but I remember in China, each Spring, when the peach or cherry trees start blooming, I always felt so touched and excited, they seems so vibrant, so full of life. I wonder if it’s because the winter in Beijing was harsher than here in California, so the blossoms seemed more dramatic and precious, and maybe the winter had been too long.

The summer is fun too, I liked to wear my little summer dress or skirt to the park. I remember how I felt when I wore my favorite dresses or skirt to the park. It’s true that it’s not the place, but the feeling that place gives you that will stay in your memory forever, and will decide whether you like it or not. I guess I decided I like it.

My mind has traveled so far away… now I’m back to this familiar park again. I can see the big changes, getting more modern, polished and beautiful, also fortunately still the old original ones, makes me feel so close, almost can touch the old shadow with my old self. 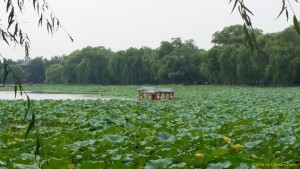 As I mentioned, the lotus flowers were there before, but not this many like today. They used to be just around the lake corner, very few, now they have almost filled up the whole lake. It’s quite dramatic, especially in their prime time, dark green and still giving off their fresh fragrance. Now there’s even a new tour program where you can take a tour boat excursion out to the middle of the lotus area, what an experience! We didn’t have that much time, however I think it’s better anyway to see them from a distance. Watching the boat sailing through the lotus area is like a painting, in the middle the pure green lotus leaves, a colorful traditional-styled boat appears and disappears.

The new area is on the northwest side of the park, it has been greatly expanded out. It’s billed as a replica of the original park (Farming and Weaving Scenic Area) with Silk worm workshop and farming land. It is quite an extension, new corridors, with a little delicate garden and even black swans, making it very unique and serene. 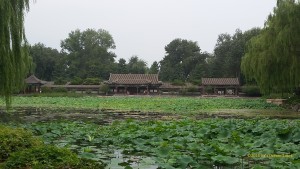 However I do miss the original part which has been torn down. There used to be huge mulberry trees. Baba told me he used to get me the mulberry leaves here when I had my pet silk worms. There also used to be a barking dog behind a fence, he always barked loudly at us, Baba would tease him by mimicking his barking, he just got madder….

When we reached the north side of the park, I realized that not much changed on this side. It’s still touristy, especially from Marble Boat on, the Long Corridor, all the way to the East Gate, and Pavilion of Heralding Spring. 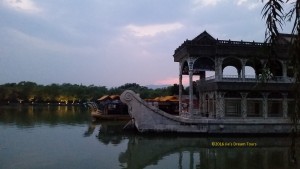 We didn’t get in some of the courtyards because it was too late, especially where the Empress Dowager CiXi lived: The Hall of Happiness and Longevity. I still remember the magnolia trees blooming dramatically there in the springtime. Actually there is a story about Empress Dowager CiXi and the magnolia trees. During her final year of life, a single magnolia blossomed during the winter. Back then, anything unusual was analyzed as a potential omen. CiXi’s nickname was actually Magnolia, so the court sycophants told her it was a sign that she was a glorious ruler. However she fell ill that winter and passed away shortly after. 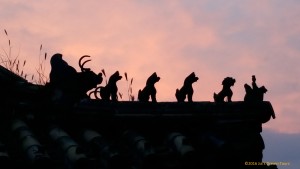 Finally, after we reached the east gate, we turned around and started climbing the Longevity Hill. That’s also a treat for me, another of our old favorite routines. We used to climb a lot on this hill; it’s not too steep, gradually climbing up, first to the place where CiXi enjoyed the rainy day scenery, the Hall of Utmost Blessing. Then all the way to the top, Tower of Buddhist Incense and Sea of Wisdom Temple. Baba always commented on how terrible that those Buddha’s heads were stolen by the invading western allies, and some locals, what a shame! That’s also a great place to have a bird’s eye view of the whole park. Seventeen Arch Bridge is like a silk rainbow in the middle of Kunming Lake. My favorite is always on our way down the hill, we will face the western hill, with a dramatic sunset! We took a lot of pictures back then, even with our old primitive camera (no smartphones then). Yet, everything looked beautiful under the sunset, which always gave me a feeling of satisfaction, as if mission completed.

This is one of the beautiful experiences you can enjoy like a local, on your Jia’s Dream Tour to China!