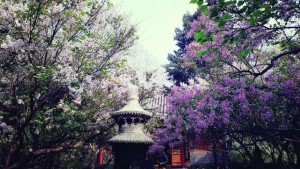 A friend just posted that the famous sea of lilacs are blooming now in Fayuan Temple, Beijing! If you haven’t heard about Fayuan Temple, it’s the oldest Buddhist 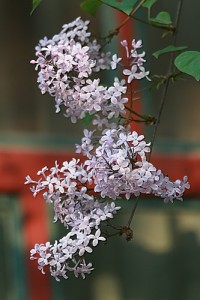 Temple in Beijing, and where the China Buddhist Institution is located. It was first built in 645 AD during the Tang Dynasty by Emperor Taizong to memorize the soldiers who died fighting in the battles with Korea. During the Jin Dynasty, it served as scholar exam place. One emperor of the Song Dynasty, Emperor Jinzong, was even house-arrested here for a while. After the Republic of China was formed, Fayuan Temple was one of largest temples that hosted important Buddhism memorial ceremonies in Beijing.

For old Beijingers, there are four legendary blooming places:  the Sea of Lilacs in Fayuan Temple; the Peony in Chongxiao Temple, the Crabapple in Jile Temple, and the Chinese Peony in Tianning Temple. They are all famous for their dramatic blooming throughout the long history of Beijing. Now only the lilacs in Fayuan Temple still exist today.

It is said the famo 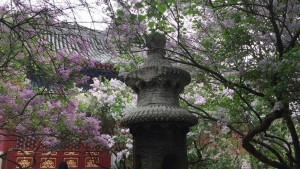 us reformer, Tan Sitong, one of the six leading members of the Wuxu Reform of 1898, came to Fayuan Temple right before he was executed.
Now it’s April, the Sea of Lilacs in Fayuan Temple have started blooming once again, after witnessing all those up and downs, still blooming gloriously, in the peaceful Fayuan Temple!